Daniel Honigman, the new Director of Digital Strategy here at LoSasso Integrated Marketing, was called on last week to provide comment for a recent Forbes article on the sale of Digg. Here are a few comments from Daniel and a link to the article: 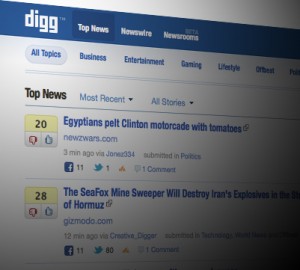 Late last week, Forbes’ Jeff Bercovici reached out for my thoughts on Digg’s $500K sale. Digg, once valued at $164 million, was one of the social web’s early driving forces, but had fallen on some tough times in recent years.

When I was in the news business, part of my role was to determine how to build community around – and drive traffic from – sites such as Facebook, Twitter, Digg and others. I had the pleasure of meeting some great people along the way, including some Digg “power users” that were also quoted in the story.

All types of businesses – digital or not – can take two lessons from Digg’s demise:

• Don’t ignore your core customer (or user) base.
Maintain an open dialogue with your customers, even if you’re riding high on your success. When you ask for their feedback, have every intention of utilizing it, or at the very least, listening to them.

• Don’t give your customers a reason to go to your competitors.
If your company sells one product or service, make sure you’re the best. In the article, I made the point that Facebook can get away with many of its changes because so many people use it for different things: photo sharing, status updates, games and more. Digg did one thing, really, but ended up losing out to its competitors because it didn’t value its core community. Once Digg changed its core product, it just wasn’t as good as its competitors, who were more than happy to claim Digg’s customers.

What else can brands take away from Digg? Please leave your thoughts as comments below!

According to a recent eMarketer survey, 55% of respondents said they would use their smartphones to... Read More »

From the opening Keynote from Greg Brown and Eduardo Conrado of Motorola Solutions through the comedic,... Read More »