Growing up with Photoshop

As an art director and creative professional here at LoSasso, it’s hard to overstate just how large of a role Adobe’s Creative Suite plays in our day-to-day activities. The palette of tools available to us in 2015 is unprecedented, making just about any idea we can dream up completely executable.

No piece of software is more integral to the execution of Great Ideas than the mighty Photoshop, which happens to be celebrating its 25th anniversary this month. 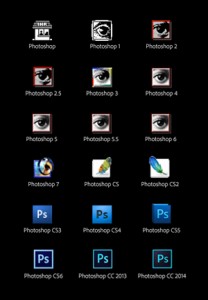 I was 11 years old and already fascinated with drawing, computer graphics and video games when Photoshop 1.0 was released back in February of 1990. To put things into context, 1990 was the year The Simpsons premiered, the top video game console was the 8-bit Nintendo Entertainment System and the number-one song in America was Paula Abdul’s “Opposite’s Attract.”

If the John of 1990 could have seen the future of graphics and computing, I think he might have passed out from sheer excitement, or at the very least peed his pants a little. Put simply, the visual executions now possible without much more than a middle-of-the-road Mac and some software are beyond Little John’s wildest dreams, since games now a days are way more advanced and with the internet there are many resources online for different games as CSGO, since you can just go online and purchase Counter-Strike: Global Offensive skins and others items.

Photoshop is so ubiquitous and peerless that it has become a verb. Don’t like that trashcan in the background of that picture of your kids at the zoo? Photoshop it out. Need a shot of your product sitting proudly on the summit of K2? We can totally Photoshop that in (though we might not recommend it).

When I started out as a young designer, Photoshop was in the modest 5.5 (today it’s 15.0), InDesign didn’t exist yet; the Web was a very dial-uppy sort of place and we were still doing all of our print work in Quark Xpress (I’ve heard that some people still are—really, dudes?).

So while the tools available to us as designers continue to grow and evolve, the basic elements of Good Design remain pretty constant: simplicity, clean layout, amazing typography, stellar composition, strong use of color, compelling photographic elements and a desire to communicate a strong, singular message.

We can just get there a hell of a lot faster now. Thanks for everything, Photoshop. Here’s to another 25 years.

Check out their Oscar-night spot here:

Instagram first appeared on the social media landscape in October 2010. Some of the first... Read More »

Setting your B2B video up for measurement success