Published March 18, 2009 10:00 am by LoSasso
Categories: Branding, The business of marketing

As reported by Ad Age in a recent online article, Chicago’s most iconic structure, the Sears Tower, will here-after be referred to as Willis Tower. Willis Group Holdings(WGH) will be paying a mere $14.50-per-square-foot rent and receive naming rights for free. 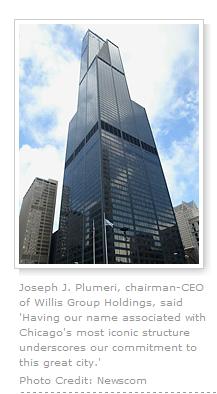 A mere three years ago this bargain would have been inconceivable. Back in 2004, after the building was sold, some experts speculated that the naming rights could fetch around $10 million dollars. This unbelievable deal is no doubt a result of the recent economic downturn and continued fallout from the September 11th terrorist attacks in 2001, which has left skyscrapers like the Sears Tower struggling to fill office space.

While there are doubts about whether or not the name will be embraced by Chicagoans, this deal will undoubtedly bring WGH a lot of press and consumer attention. With the market down and most companies cutting back, opportunities like this one will undoubtedly continue to pop up.

If you have been paying attention to the media lately, then you have probably noticed that President Obama is everywhere. According to an Advertising Age article, his PR blitz seems to be working.

As consumers continue to choose online media options over traditional forms of media like print newspapers, news sources are forced to search for new ways to stay profitable...