What keeps brand managers awake at night?  I have no idea but my guess is it’s brand integrity and the constant battle against those who would destroy their hard work.  I speak of course of the social media cornucopia that spilleth over with third parties ripping or altering others’ brand messaging.  This is the cost of a democratization of information.

That said, I’m flipping through an advertising magazine and see a full page ad with a blown up faux penciled-in registered symbol {®}. A big eraser has partially erased the symbol and below it Kleenex® has a message for its consumers/those pirating its brand name?  It’s unclear but the text reads, “You may not realize it, but by using the name Kleenex® as a generic term for tissue, you risk erasing our coveted brand name that we’ve worked so hard for all these years.  Kleenex® is a registered trademark and should always be followed by a ® and the words ‘Brand Tissue’. Just pretend it’s in permanent marker.”

As a casual reader, I felt I had just been scolded by Kimberly-Clark Worldwide Inc. for occasionally calling any old facial tissue, a Kleenex.  In the wake of Domino’s and Miracle Whip’s new ad campaign strategies of embracing the negative and flipping the script, Kleenex stands out in stark contrast.  Was that their marketing strategy?  It seems a better approach would be to say, “Our brand has become so synonymous with facial tissue that everyone’s been calling other brands OUR name.  We encourage you to remember who the original Kleenex® is.”  Granted this was an isolated case of an ad and it hasn’t appeared in mass media but what are the ramifications for this type of insuring one’s brand integrity?  For such a large company, probably very little damage will ensue but it begs to be considered — is this the revolution and will it be televised? 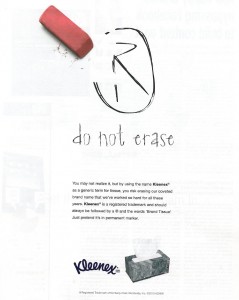 As seen in the February 14, 2011 “The Relationship Issue” in Advertising Age Magazine

Two dimensional QR codes have been alive and abroad for several years and yet, the... Read More »

Since its advent, savvy business people have known that there was great value to be... Read More »