A Potential Customer With a Problem

I live in an old house with a leaky basement. I've put up with it for over a decade, but after the last round of big storms rolled through, I'd had enough. I jumped online and Googled basement waterproofing companies whose names were top of mind. I reviewed their websites, looked at some Yelp reviews, made a decision and set an appointment for a free inspection and consultation with a company called U.S. Waterproofing.

At this point, you'd think I could exhale and wait for the appointment and recommended solution, but instead of feeling a sense of relief, I kicked into "pre-service-technician-appointment angst" mode. You might call it something else, but everyone has some degree of this when working with a new company.

Did I make the right choice? Are they going to show up on time? Will they show up at all? If I don't take off time and my wife lets them in, will the guy be a creepy, ex-con weirdo?

You get the idea. I don't know this company yet - and based on my past experiences with service calls, I expect to be underwhelmed. A lot of trust and follow-through is needed for me to feel good about the appointment and the company – and for me to ultimately move ahead with the the work.

An Opportunity to Surprise

Jump ahead one week. The appointment is tomorrow. I'm still stuck on the ex-con weirdo thing, so I plan to leave work early to be there at the scheduled time. I think, "Why bother, the guy will probably be three hours late if he shows up at all."

Imagine my surprise when, later that day, I received an appointment email from U.S. Waterproofing confirming for the next day at 12:30. The email talked about what to expect during the visit, and included links to two of the company's relevant blog posts:

This was great, but they didn't stop there. They also included the name and a video of the technician who would be coming to the house – my "Personal Advisor" John Heavey – as well as his mobile phone number if there were any problems. Wow. 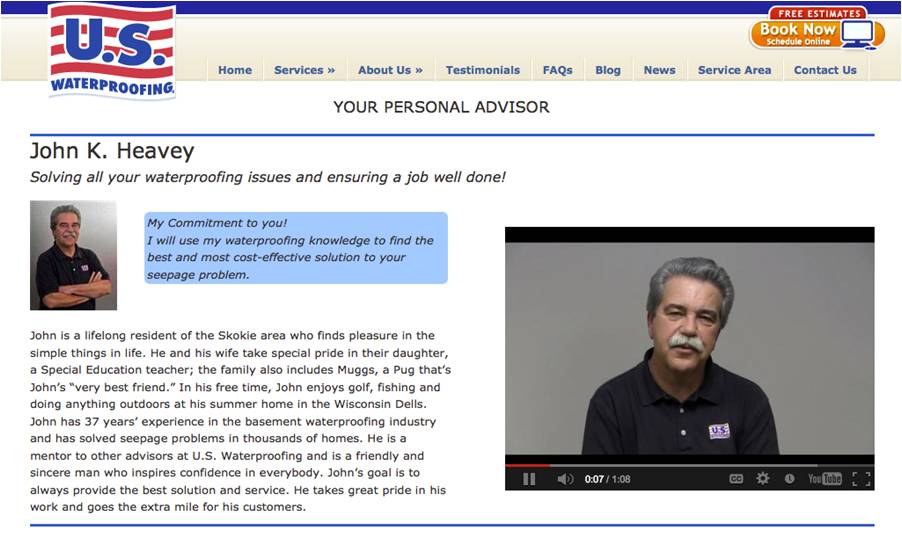 An appointment confirmation email was sent with a link to a video about the technician who would be coming to the house.

It turns out John is from the area. He has a grown daughter who is a special ed teacher, a beloved black pug named Muggs, and he's been doing this type of work for over 30 years. I was instantly put at ease. The guy coming to my house was not going to be a creep, and he has a lot of experience solving problems similar to mine.

When the day arrived and John was running a little late, I received a call from him letting me know when he was going to get there. During the consultation, he was very friendly and informative and walked me through my options. He told me what he would do (and not do) if it were his house. He left an estimate in an organized folder that explained the next steps to take when I am ready to move forward.

A few days later I received a follow-up email from one of the owners:

Hello David,
Just thought I'd reach out to see how things went with John.
I take a lot of pride in my family business, so if there's anything you'd like to discuss - questions, praise or even complaints - please get in touch. I look forward to hearing from you and hope to earn your business.

I sent him a nice email complementing him on the whole experience. It's been very refreshing. 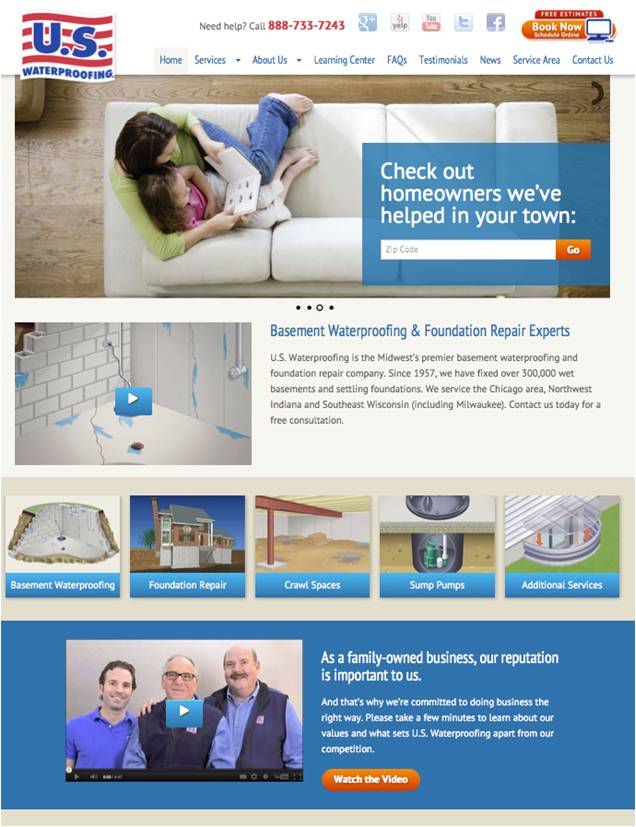 The company has a site loaded with informative content about home waterproofing and foundation repair – great for SEO – and a family-oriented approach that makes you feel like they care about doing a good job.

How Can You Surprise Your Customers?

U.S. Waterproofing has clearly thought about the issues people face when choosing a waterproofing company, and in a simple, thoughtful way, made the whole process easier and more pleasant.  They surprised me, and in doing so, removed barriers to working with them. When I pull the plug, I'll be using their company to do the work.

Take a lesson from the team at U.S. Waterproofing. Ask yourself these questions:

I challenge you. Find something simple you can change, and get the ball rolling on creating amazing customer experiences at your company today. Many times the effort needed to address these issues is small – but the rewards can be huge – winning customers and setting the stage for great word of mouth from raving fans of your business now and in the future.

NEXT POST:
How to generate ideas [steps + techniques + resources]